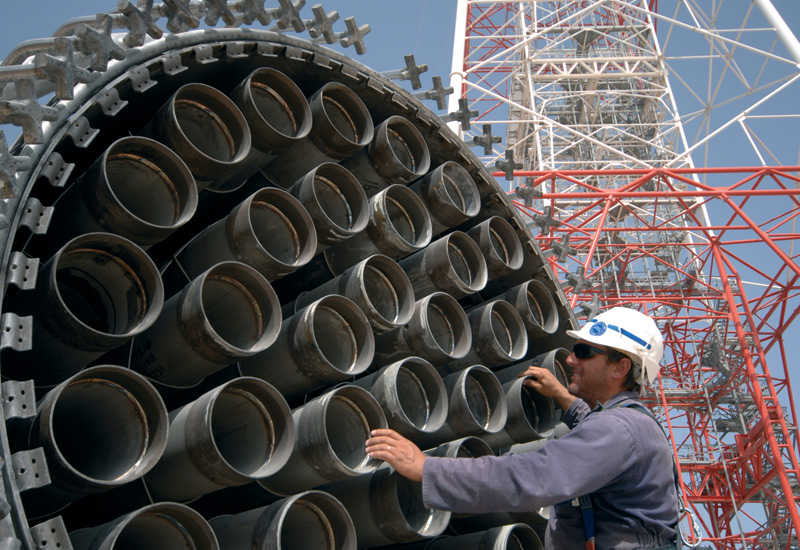 Hemmed in by weak demand and scarce storage, the world’s biggest exporter of liquefied natural gas may soon face a stark choice: curb output or ignite a battle for market share that has the potential -- just as in the oil market -- to turn gas prices negative.

Qatar began in February redirecting LNG cargoes away from Asia, where the coronavirus was hobbling sales, and sending them instead to northwestern Europe. That quick fix didn’t last, as the pandemic soon engulfed Europe’s biggest economies and left Qatar struggling for places to park unsold cargoes.

The Persian Gulf state led by Emir Sheikh Tamim bin Hamad Al Thani has a key decision to make with far-reaching consequences. Cutting production of its main export would squeeze government revenue at a time when crude’s collapse is adding to pressure on LNG prices, some of which are linked to oil. An output cut might also enable Australia to strike a blow to Qatar’s national pride by snatching its crown as the world’s top exporter.

If the emirate opts to slash prices to secure sales, however, it might exacerbate the crash in gas that threatens margins even for low-cost producers. A free-for-all could even end up pushing prices below zero, as happened briefly last month in the U.S. oil market when crude flows overwhelmed capacity at the storage hub of Cushing, Oklahoma.

Qatar stands to lose no matter which choice it makes.

“Either Europe doesn’t want it and therefore the cargoes are stuck in Qatar, or they will have to shut in production,” said Thierry Bros, an energy associate at Harvard University’s Davis Center for Russian & Eurasian Studies. “If they force cargoes into Europe, you’re going to have exactly the same as what we’ve seen in Cushing, which is negative prices.”

Europe’s comparatively transparent pricing has long made it a favored destination for cargoes. Now, with demand there slumping, more gas is going into storage facilities, and those are filling up fast.

Deliveries of Qatari LNG to northwestern Europe peaked in April. A convoy of four tankers arrived over the last three weeks at Belgium’s Zeebrugge import terminal, where state-owned Qatar Petroleum has booked all the import capacity until 2044.

“Demand is depressed, and storage is too high for this time of year,” said Graham Freedman, an analyst at consultant Wood Mackenzie Ltd. “It looks like it’s going to continue for the next 12 to 18 months.”

Qatar appears to be slowing shipments to Europe. Import schedules suggest deliveries into northwestern Europe won’t climb in May as they did in April, and 17 LNG tankers -- several more than usual for this time of year -- are currently idling off the emirate’s coast. Qatar Petroleum, which manages the country’s exports, didn’t respond when asked to comment.

QP won’t need to divert cargoes to Europe once demand for gas in Asia recovers, but that could take many months. The amount of power generated from gas will probably decrease by 3% in 2020 compared with expectations before the coronavirus outbreak, according to BloombergNEF. Meanwhile, the global LNG surplus could persist into the middle of the decade, the International Gas Union said in April.

Gas producers have yet to form a cartel like the Organization of Petroleum Exporting Countries, which currently leads global efforts to slash oil production and prop up crude. LNG suppliers can hope for no such coordinated support for gas prices, which have plunged by more than half this year to about $2 per million British thermal units.

In a battle for market share, Qatar would have an edge on its rivals; its plant at Ras Laffan produces the world’s third-cheapest LNG, according to consultant Rystad Energy. Even so, tumbling prices are pushing Qatar’s LNG toward break-even levels.

Negative gas prices would be especially damaging for U.S. operators that only recently started production and are still burdened with heavy expenditures. Sub-zero prices could also cause delays for any liquefaction projects yet to secure financing. LNG is gas that has been chilled into a liquid, which producers can then export to far-flung destinations without the need for pipelines.

Producers in the U.S. have higher costs than Qatar and will probably cut output after customers canceled several shipments for June. Norway and Russia have already trimmed gas exports to Europe.

“The next step would be for Qatar to reduce its production,” said Bros, the Harvard energy associate. “It won’t have any other choice.”