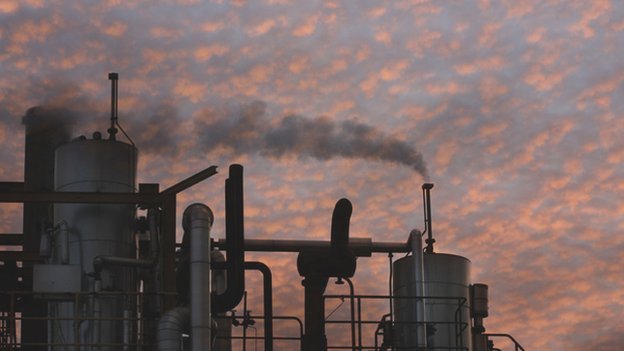 'Major' coal find under Firth of Forth

Cluff Natural Resources (CNR) said a study has found as much as 335 million tonnes of coal near Kincardine and the company is now seeking permission to build the UK's first deep offshore underground coal gasification (UCG) project to extract it.

The amount of coal has been confirmed by an independent body and the project will create new posts and protect existing jobs in the area, Cluff said.

The process sees the coal drilled and mixed with oxygen to produce syngas, which can be used to power boilers, turbines and supplied to petrochemical, steel or chemicals industries.

Environmental campaigners described the plans as "irresponsible" and raised concerns and called for a move away from using fossil fuels.

CNR chairman and chief executive Algy Cluff said: "This report supports the company's UCG licence selection and forms the basis for future investment in Scotland while proving the performance of the deep UCG process in a UK context.

"The development of UCG at the Kincardine licence area would result in the creation of new jobs, help protect existing industry as well as create significant supply chain benefits.

"The emerging UCG industry has a significant role to play in unlocking the UK's most abundant indigenous energy resource which, with the imminent closure of the last deep coal mines, is now otherwise effectively beyond reach.

"The deep offshore UCG projects being undertaken by CNR have significant environmental safety and, when combined with carbon capture and storage, climate change benefits compared with coal mining and coal-fired power generation."

WWF Scotland director Lang Banks said Scotland needs to rely more on electricity and renewables rather than coal and gas.

"Plans to 'burn' coal under the Firth of Forth will not deliver that aim and should therefore be a complete non-starter," he said.

"In a worst-case scenario, proposals such as this one could even extend our use of fossil fuels, locking us into a high carbon world.

"Just over a week ago, scientists from the United Nations issued their latest predictions of the growing threat from global climate change and the need to be rapidly phasing out our use of fossil fuels.

"Since the developers themselves have admitted that carbon dioxide will be emitted by their plans, from a climate change perspective this scheme is nothing short of irresponsible."

Stuart Haszeldine, Professor of carbon capture and storage at the University of Edinburgh, said: "CNR's offshore deep UCG is a bold and innovative proposal which could help to regain energy security and value through low-carbon production of fossil fuel.

"Domestic coal resources exist which are sufficient to supply many decades of secure energy production and feedstock.

"But those resources will remain inaccessible until new extraction technology is deployed such as UCG, and unless the produced carbon is captured after use.

"Fuel and feedstock extracted from coal by underground gasification will be much cleaner than importing coal because most of the engineering occurs deep below ground offshore.

"Underground gasification will have less impact on the public than other forms of unconventional gas extraction."