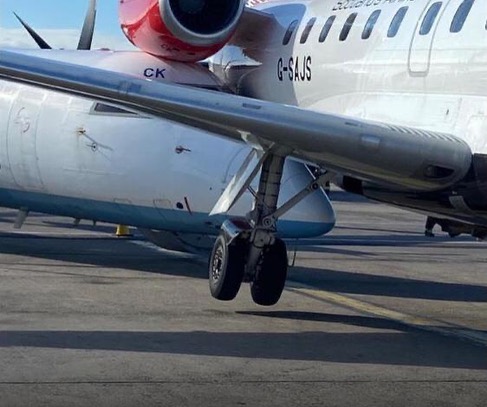 CCTV from Aberdeen international airport showing the moment a Flybe jet collided with a Loganair Jet this week has been leaked online.

In the clip, shared on the I Work on the Rigs Facebook page, a airport worker is seen frantically trying to push the aircraft to stop it rolling towards a parked Loganair Plane.

A second person then runs to the front of the aircraft where another member of staff is seen trying to push the aircraft.

All then run clear of the area as it impacts the other jet.

Aberdeen airport commented on the video, demanding it be removed immediately as it is part of an ongoing investigation. Facebook users didn't miss the opportunity to dig at the airport with one user leaving the much-liked comment "Aberdeen Airport, so you can’t keep a hold of your CCTV files either!!!!"

The incident, in which nobody was injured, and involved empty jets, happened at Aberdeen International Airport on Tuesday.

Pictures from the accident which were leaked to Energy People just after it happened on Tuesday, showed the former Flybe jet wedged under the rear of the Loganair plane.

A spokesman for Loganair speaking after the Tuesday night confirmed the details of the incident at the airport.

He said: “Just before 6pm this evening a Loganair Embraer 145 regional jet, parked with no passengers or crew members aboard, was hit by a former Flybe Bombardier Q400 aircraft, which we understand was being prepared for departure after being stored at Aberdeen Airport.