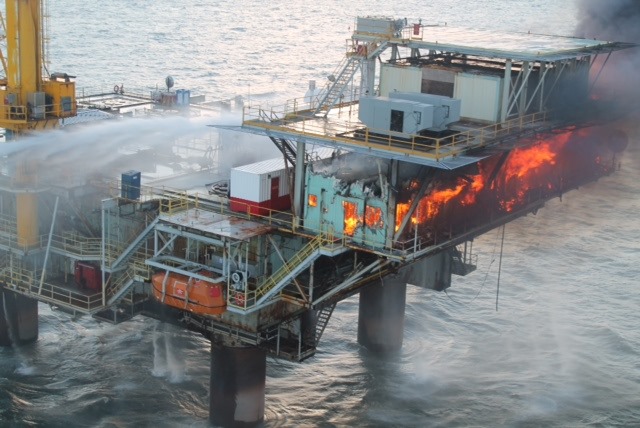 According to the Alaska Department of Environmental Conservation, firefighting capability and monitoring will be maintained through the night and the Unified Command will remain active until the platform is fully secured.

The unified command consists of the Coast Guard, Alaska Department of Environmental Conservation and Alaska Hilcorp. The platform, located offshore in Cook Inlet approximately 18 miles northwest of the City of Kenai and approximately 45 miles southwest of Anchorage is run by Hilcorp.

There were 4 personnel on board the platform. All personnel were evacuated with no injuries. There are currently 4 vessels on scene in response to the fire. As of 11:30 a.m. local time on scene responders report no visible flames.

“Safety of the responders and the environment remain a priority as this is considered an ongoing response,” the Unified Command said in a release.

Primary firefighting efforts came from Ocean Marine Services vessel, Discovery. The Discovery along with Cook Inlet Spill Response vessel, Endeavor, will remain on scene until released by the Unified Command.

Multiple fly overs were done throughout the day by US Coast Guard, Nikiski Fire Department and Hilcorp personnel to monitor the situation.

It has been confirmed that the fire started and remained in the living quarters area of the platform.

The exact cause of the fire has not yet been determined. This was not a gas production related incident and there has been no release of hydrocarbons to Cook Inlet.

A full investigation to determine the cause of the fire is underway. On scene investigation will begin once the Baker platform has been fully secured.