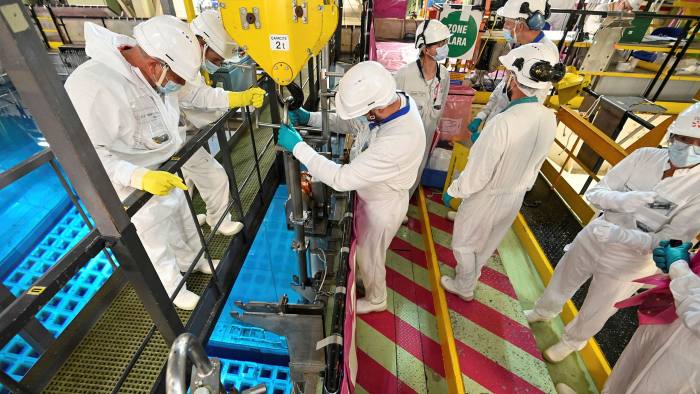 Emmanuel Macron has been a vocal supporter of nuclear power, insisting in December that the carbon emission-free energy was key to France’s green transition. But less than a year before presidential elections, the French leader is leaving the multibillion question of adding new reactors undecided as the issue becomes increasingly divisive.

France’s 56 reactors — making the country the second-largest atomic nation by capacity behind the US — produce 70 per cent of its electricity and explain why the country boasts a fraction of Germany’s carbon emissions. But an estimated €49bn by 2025 has been earmarked to extend their working lives and Macron has yet to commit to any new reactor, beside the one that state-owned company EDF is building in Flamanville, in the north-west.

In previous elections there were only “candidates who avoided the question, hypocritically, cynically”, said François Bayrou, leader of the centrist Democratic Movement party, who was tasked by Macron last year to submit a report on French energy.

But “it is necessary to face it. Because reality is not going to accommodate avoiding it any further”, he told the Financial Times. “Decisions [on nuclear] are urgent,” said Bayrou, who wants to see new reactors.

To Macron’s political left, in what polls suggest will be a tight presidential race, are green parties that are strongly anti-nuclear and pro-renewables. To his right, lie voters largely in favour of nuclear power and politicians who oppose wind turbines in support of rural voters.

France had “had enough of wind turbines, they’re finished”, Xavier Bertrand, a presidential candidate of the traditional right, said recently as he pushed for new job-creating nuclear projects. Marine Le Pen, the far-right leader expected to face Macron in the second run-off round of the presidential elections, has also railed against wind power.

French president Emmanuel Macron has so far as side-stepped the issue, postponing the decision on new reactors to 2023 © Ludovic Marin/AFP via Getty
That leaves Macron in the middle, juggling an issue that encapsulates the problem he faces trying to build a coalition that spans urban elites and rural France. In one recent poll, half those asked considered nuclear power an environmental “threat” while 47 per cent saw it as an “opportunity”.

So far, Macron has side-stepped the issue, postponing the decision on new reactors to 2023 “at the latest”, when the badly delayed next-generation European Pressurised Reactor — EPR — is expected to come online in Flamanville. EDF is also working on plans for updated EPRs.

“Macron has a position that is a bit confused on this issue; he’s in a posture of ‘at the same time’,” said Dominique Reynié at think-tank Foundation for Political Innovation, alluding to the president’s tactic of trying to appeal to disparate bits of the electorate simultaneously.

On the one hand, Macron has said he intends to bring nuclear’s share of France’s energy down to 50 per cent by 2035, by investing hugely in renewable energy, storage and news grids. Yet as the same time, France faces a “nuclear cliff effect” in 10 years, according to Benjamin Fremaux, an energy expert at the Institut Montaigne, and just extending the lives of older reactors requires huge investment.

“The problem is that Macron doesn’t at all want to have this debate in public. I think he wants to sort this out in the offices of the Elysée,” said Fremaux.

For critics, nuclear power is risky and its full costs underestimated. Japan’s Fukushima nuclear disaster shook faith in the industry and caused Germany to speed up the closure of its plants.

For its supporters, among nuclear’s advantages is that it provides a stable base on top of which can sit more intermittent wind and solar power. That is why Fatih Birol, executive director of the International Energy Agency, called the French nuclear fleet “a safety net”.

“Among all the advanced economies, France has the lowest carbon emissions, thanks to the nuclear power industry,” Birol said. “If you want to compare Germany and France, one kilowatt of energy you produce in France is six times less carbon intensive than the equivalent in Germany.”

RTE, the French grid operator, recently published a study that ran through options for France’s future energy mix by 2050. One scenario is based on 100 per cent renewable energy relying on improved storage — the first time such an exercise was done with this level of detail.

An updated study is due in the autumn, laying out the relative costs of nuclear and renewables. The government says it will be key in setting the terms of the debate.

A demonstrator holds a placard reading ‘Fukushima, an endless disaster’ during an anti-nuclear rally in Paris in March © Thomas Samson/AFP via Getty
“We’re going to put everything on the table and see how much it costs,” Barbara Pompili, Macron’s fourth energy and environment minister in as many years, told the FT.

By now, the question has long gone past technical issues and into political terrain. That worries experts who fear decisions will be based on oversimplified criteria.

“We cannot sacrifice our energy security due to political debates,” the president of the commission of energy regulation, Jean-François Carenco, told French daily Les Echos.

“Everyone is concentrating on wind versus nuclear power, but that does not sum up all the challenges,” said Thomas Veyrenc, executive director at RTE in charge of strategy, planning and evaluation.

It remains unclear how Macron will handle the nuclear question in his re-election campaign. Bayrou is convinced “the question will be dealt with” eventually and the debate should be had by the candidates. Others worry that Macron’s political hesitation will lead to the debate being avoided altogether.

“What’s sad is that . . . the choices we are making are really non-choices,” said Fremaux.