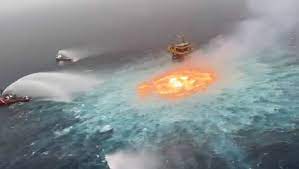 One Dead And Several Injured After Fire Erupts On Pemex Platform

A fire has erupted on a Pemex-operated platform offshore Mexico, causing the death of one person and injuries to several others while some are still missing. The incident comes less than two months after a fire on the ocean surface dubbed the “Eye of fire” broke out near Pemex’ Ku Maloob Zaap oil development.

Mexico’s state-owned oil and gas giant Pemex said on Sunday that the fire had erupted the E-Ku-A2 platform located in the Bay of Campeche in the Gulf of Mexico. The fire is under control now.

The company’s efforts are now focused on searching for the missing workers, stabilizing the integrity of the platform, and damage assessment.

In the statement on Sunday, Pemex confirmed that one of its workers had died, three had suffered injuries, and one person had suffered a nervous breakdown. When it comes to Cotemar company, the contractor, three people were injured and three are missing.

The search efforts for the missing people are in progress and the Mexican company said that an investigation would be conducted to discover the cause of the fire.

This is the second incident for Pemex in less than two months after the “Eye of fire” appeared near Pemex’ Ku Maloob Zaap oil development in early July. A gas leak from an underwater pipeline was responsible for starting the blaze captured in videos that quickly went viral.

Ku Maloob Zaap is located just up from the southern rim of the Gulf of Mexico and is Pemex’s biggest crude oil producer, accounting for more than 40 per cent of its nearly 1.7 million barrels of daily output.

Pemex later said that environmental damage from the incident was avoided due to quick action by its workers.