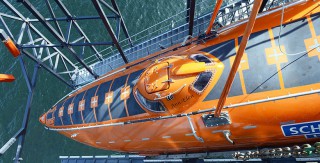 The deadline for comments on changes proposed by the Petroleum Safety Authority Norway (PSA) to regulations for lifeboats on offshore facilities expired on October 1, 2014.

PSA says these responses will now be studied in detail before the amendments are finalised.

Ensuring the same level of safety for everyone working in the Norwegian petroleum industry has been the fundamental principle underlying the PSA’s work on the lifeboat issue, the regulator says. This means that compensatory measures must be adopted on a facility if its lifeboats fail to satisfy the official regulations. Such action could include improvements to the craft themselves, operational restrictions, halting activities or reducing the offshore workforce during bad weather.

The lifeboat issue on the Norwegian continental shelf (NCS) goes back to 2005, when a freefall lifeboat on the Veslefrikk B platform suffered serious damage during a test drop. This incident prompted extensive studies, which found that neither freefall nor davit-lowered lifeboats on the NCS satisfied the official requirements for evacuation. Weaknesses identified related to the structural strength of lifeboat superstructures and hulls, gravitational forces acting on passengers, and the propulsion needed to escape from a facility.

“A functional requirement in the regulations is that it must be possible to evacuate personnel from offshore facilities to a safe area in all weather conditions,” explains Anne Vatten, the PSA’s director of legal and regulatory affairs. “The proposed regulatory changes don’t involve any sharpening of this requirement. They’re intended first and foremost to clarify the provisions on structural strength, passenger safety and propulsion. References are also provided to new standards and norms produced by the industry itself. “Strictly speaking, the proposed amendments to the regulations merely involve returning us to the level of safety we thought prevailed in 2005.”

According to PSA, Statoil has been the flagship in efforts to upgrade lifeboats on the NCS, and appreciated the need for improvements at an early stage. PSA also says that Statoil has devoted substantial efforts to finding solutions for the facilities it operates, including the development of completely new lifeboats which meet the evacuation requirements.

After a further systematic review of its lifeboats, Statoil informed the PSA this summer about structural weaknesses in a number of its freefall craft.

The company has accordingly introduced operational restrictions on 14 of its facilities, and an upgrade plan is now in place. It had a meeting as recently as September with the PSA to present its new findings, PSA writes.

“Together with the lifeboat suppliers, it has made a substantial contribution in this area and deserves praise for that.”

Despite major industry projects, however, important work remains to be done and Myhrvold emphasises that each player has an independent responsibility for an acceptable evacuation.

“Through our supervisory activities, we’ll now follow up how other players on the NCS use the information provided by Statoil to ensure this from their facilities,” she says.