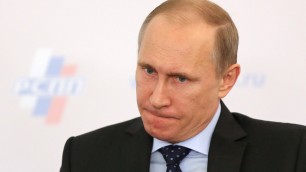 Russia is preparing for a “catastrophic” slump in oil prices, which it can weather thanks to a cushion of more than $400 billion in reserves, President Vladimir Putin said.

“We’re considering all the scenarios, including the so-called catastrophic fall of prices for energy resources, which is entirely possible, and we admit it,” Putin said in an interview with the state-run Tass news service before attending this weekend’s Group of 20 summit in Brisbane, Australia, according to a transcript e-mailed by the Kremlin today.

Russia, whose economy is forecast by the central bank to run zero growth next year, is struggling under the weight of a plummeting ruble and sanctions imposed over the conflict in Ukraine. Brent crude, the grade that underpins prices for Urals, Russia’s main export blend, is set for a record losing streak amid speculation that OPEC will refrain from cutting production to ease concern of a supply glut.

The decline in oil prices is exacting a toll on the world’s biggest energy exporter, which gets about half of its budget revenue from oil and natural gas taxes. That’s limiting Russia’s ability to withstand sanctions by exhausting public finances. The non-oil deficit, the shortfall excluding revenue from the energy industry, exceeds 10 percent of economic output.

“A country like ours finds the situation easier to cope with,” Putin said. “Why? Because we are producers of oil and gas and we handle our gold and currency reserves and government reserves sparingly.”

Russia, with $421 billion in international reserves, has a “big enough” buffer to meet all social commitments and maintain budgetary and economy stability, Putin said.

The value of the stockpile last week extended its slide to the longest since 2008, declining by a fifth from 2013’s peak as the central bank attempted to smooth the ruble’s decline.

Brent, used to price about half of the world’s oil, for January settlement was 7 cents lower at $77.42 a barrel on the London-based ICE Futures Europe exchange.

Have your say on this story below or send your news leads to news@oilandgaspeople.com