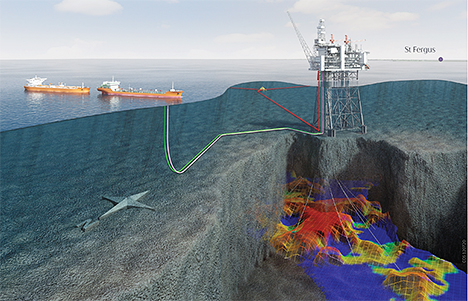 Statoil has on behalf of the Mariner co-venturers awarded the contract for integrated drilling and well services on the Mariner field on the UK continental shelf (UKCS) to Schlumberger Oilfield UK Plc.

“This is a very significant agreement for the Mariner project, and the result of an innovative, new procurement approach, where the supplier will work as an integrated part of the Statoil team delivering most of the drilling and well services on the Mariner field,” says managing director for Statoil Production UK, Gunnar Breivik.

From its Aberdeen base, Schlumberger will deliver all the main drilling and well services for Mariner, including drilling, completion, electrical submersible pumps (ESPs), cement and fluids.

A total of 22 drilling and well services are included in the scope, including a logistics support responsibility that goes beyond the normal scope for similar Statoil contracts.

The contract will start in January 2015 and has a duration of four years, plus options for several additional four-year periods.

“The aim for this contract is a long-term partnership with a performance-based compensation format rewarding actual performance — metres drilled and completed — rather than usage of time and material.”

The Mariner field, located approximately 150 kilometres east of the Shetland Isles, is currently under development by operator Statoil and its co-venturers JX Nippon and Dyas.

Mariner is the largest field development on the UKCS in more than a decade, and will be in production for at least 30 years. Drilling is planned to start in 2016 with production start-up following in 2017.

According to Statoil, the main Mariner platform will have one drilling rig and one well intervention and completion unit. In addition, a new-build jack-up rig will be located next to the Mariner installation, working through well slots on the platform for the first four years. Over the field’s lifetime as many as 130 well targets are planned.

“The aim for this contract is a long-term partnership with a performance-based compensation format rewarding actual performance — metres drilled and completed — rather than usage of time and material. Together we will now establish an integrated operations team in our Aberdeen office, working closely with both the service supplier and the drilling contractor Odfjell and rig contractor Noble to plan and optimise operations. We will work side by side to meet the challenges in the market, driving performance, creating value and dividing risk,” says Breivik.

The contract with Schlumberger also includes options for Bressay, another Statoil-operated field on the UKCS, currently in the concept evaluation phase. Furthermore, it will also work as a framework agreement for exploration drilling on UKCS where Statoil has the option to use Schlumberger for any of the drilling and well services covered by the scope of the contract.